Keep up to date with the latest developments within Coastal Accounting and associated companies.

Coastal Accounting partnered once again with the East Coast Radio Big Favour to sponsor Grant a stove and oven to help him generate an income with his business Captain Cupcake.

The 2018 Awards function celebrated not only the annual achievements of individual staff, but also marked the 10 year anniversary of Lockhat Incorporated.

Celebrating the 2018 Woman’s Day with all the lovely ladies at the Port Shepstone office.

The Durban office spent the 2018 Nelson Mandela Day at the Pick n Pay Food Forward initiative. Donating their time to a good cause.

Lockhat Auditors sponsored Joshua Saunders through their partnership with the East Coast Radio Big Favour, in order for him to fulfill his dream of representing South Africa at the Sanyo International Lifesaving Cup in Japan.

Saying Farewell to Salisicia Gounder, pictured here with Rohith Ramsarup and Imraan Lockhat, after she completed her articles and decided to move to Johannesburg to further her career.

The 2017 Annual Social was held on the MSC Symphonia. Enjoyed by all staff and a definite experience to remember.

The staff enjoyed a break this year, playing indoor sports at the action sport arena in Durban North. Fun was had, and not to mention the amazing food that was served!

Ahmed Paruk and Priya Rambharos, the Audit Managers at Lockhat Incorporated as well as Husayn Paruk, audit trainee will be sitting for their second Board exam in November 2016 to qualify for the CA(SA) designation with SAICA. Both Priya and Ahmed have served their articles and have grown with the firm.

Friday’s at Coastal Accounting. are always a treat! Just another tasty lunch hosted by the Partners

The 2016 Annual Social was held on the MSC Symphonia. 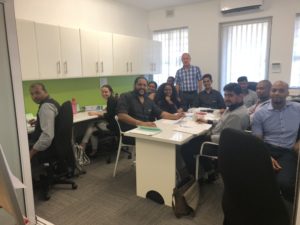 NSOA Training is an integral part of equipping trainees with the essential theory, practical knowledge, and interpersonal skills needed, the aim is to empower aspiring Chartered Accountants to carry out their work assignments with confidence and competence.

On the 30th of July, the staff of both Lockhat Incorporated and Coastal Accounting were treated to a lovely lunch, held in Port Shepstone.  Staff were presented with awards, ranging from the “Bermuda Triangle Award” (for the staff member who has the most “unexplained disappearances” from their desk), to the “Highest Billers” and “Most Valued Person” Awards.  The afternoon was then completed by our IT guy, James, providing some fantastic entertainment on the guitar.

The partners will be rewarding the entire office with a weekend cruise in consideration of their efforts put in at the firm over the last 3 years.  So, in January 2016, the entire office has been booked off to set sail on board the new refurbished MSC Sinfonia for some much needed rest and relaxation.

The Firm appointed approved service providers to the KZN Treasury

During July, 2015 the firm was appointed to the panel of approved service providers to the KwaZulu Natal Provincial Treasury to provide internal audit services to entities throughout the province as required by Provincial Treasury.

Lockhat Incorporated can now act as mortgage originators on behalf of our clients.  Our clients no longer have to make direct application to the banks, which is often a lengthy and frustrating procedure with long waiting periods.  We can now process our clients’ loan applications on their behalf.

In March 2015, we implemented an improved employee training program.  These training programs provide multiple benefits for our employees, our clients and the company.  We are also currently in the process of implementing a training website which will have a wide variety of training videos on various accounting, auditing and tax topics.

In February 2015, we increased our vehicle fleet to 4 vehicles, in order to be better equipped to serve our clients that are located further away.

We will shortly be offering a fully electronic online recruitment facility which will focus on the job market in the accounting profession. This new service will operate through Lexcorp Consulting.

At the start of the 2015 year, Lockhat Incorporated moved all our systems to cloud computing.  All data is stored in the cloud and can be accessed quickly and easily by all of our employees.  This means that our employees are now able to assist our clients from anywhere in the world.

The South African Institute of Chartered Accountants nominated and selected Lockhat Incorporated as a prominent and up and coming young professional firm, to profile in their monthly magazine.  Lockhat Incorporated was featured in the October 2014 publication of the Accountancy SA magazine focusing on six small to medium practice firms in South Africa.  The article was based on what makes us different and some of the challenges and difficulties we face in the SMP environment.

Lockhat Incorporated registered with the Financial Services Board and is now able to offer our clients tailor-made financial solutions for all their insurance, investment and healthcare needs.

Partners register with ISACA resulting in increase IT Audit work

We have partnered with Qdos Consulting recently which will assist in all professional services should you undergo a SARS audit in the future. This service allows you to focus on solving SARS queries using our expert tax knowledge without having to worry about our professional fees. SARS audits have become an expensive affair as they are increasingly time consuming from an accountants point of view.

The firm acquired a Pretoria based practice during August 2013 which enables us to serve the economic hub of the country. This now takes our staff complement to just short of 50 professionals.

Firm appointed to provide all taxation services by TIA

The firm was appointed in July 2013 by the TIA (Technology Innovation Agency), a division of the Department of Science and Technology of South Africa, to provide all Taxation services by way of a fully outsourced facility.

Give a child a family

In July 2013, staff members prepared 70 food parcel hampers for the “Give a child a family” charity in Margate.

We are now providing an outsourced payroll service whereby monthly payslips, leave records, employment contracts and basic labour law advice is dispensed from our practice. We are using the popular payroll software VIP and we offer this service at competitive rates which enable clients to focus on their core activities.

In December of 2012, various members of our office attended a first aid course at the Red Cross in order to better equip the office to deal with medical emergencies.

The office undertook various social responsibility initiatives during December 2012. We donated food, DVD players, electrical rewiring, toys and other durable goods to the Assisisi home for the mentally challenged, uMephi house for abandoned children and the iKhayalethu orphanage.

Lockhat Incorporated was appointed during July 2012 as preferred mentor to assist the National Empowerment Fund with turning around businesses and mentoring entrepreneurs.

In June 2012, Lockhat Incorporated was among the first fifteen firms in KZN to be granted a licence to perform unrestricted BEE verifications. Additionally, we are the only firm performing BEE verifications on the South Coast of KZN.

Partner receives appointment from the Minister of Arts and Culture

In June 2012, Mr Imraan Lockhat received an appointment from the Minister of Arts and Culture to provide leadership to museums in the KwaZulu Natal region.

Lockhat Incorporated approved as a registered training office for SAICA

Lockhat Incorporated has recently been approved as a registered training office for SAICA purposes and is able to train future chartered accountants in accordance with SAICA requirements with Mr Imraan Lockhat being the approved training officer.

Lockhat Incorporated was appointed during 2012 to perform IT Audit work on the Gauteng Office of the Premier as well as the KZN Provincial Pharmaceutical Supply Depot (amongst others) on behalf of the Auditor General of South Africa.

We have sponsored and participated in various social upliftment projects during December 2011. We sponsored a jungle gym for a rural medical children`s facility; sponsored some much needed structural repair work at a local creche; sponsored a Christmas party and airconditioning for a local orphanage; made various donations to the SPCA and South Coast Hospice.

Proud association with the Auditor General of South Africa

Lockhat Incorporated was appointed during 2011 as a forensic service provider to the South African Police Services and was awarded a contract to investigate.

Partner appointed to the audit committee of municipalities

During December 2010, the office hosted a Christmas party at the eMsini Childrens Home for orphans, sick and abused children. The office purchased a gas stove which was badly needed by the home and entertained the children during the afternoon. The event was a success and thoroughly enjoyed by the team. Thanks go to Shuvee for her hard work in ensuring the event was a success.

December 2010 saw the first of many teambuilding events organised at the Izotsha Indoor Cricket Stadium. The office was divided into 4 teams of 8 players each and played against each other. Each partner had to select their own team and battle it out against the other partners team. All had a great time and our thanks go once again to Shuvee for successfully planning this event. The braai thereafter was delicious.

The practice continued its good work during May 2010, by throwing a party at the Port Shepstone Public Hospital to benefit the childrens ward.

During December of 2009, Lockhat Incorporated completed a substantial upgrade to its Port Shepstone offices. The results have been pleasing as we now have a secure fire resistant filing area, confidential setting with staff housed in a concealed area, modern boardroom with multimedia capabilities, extensive physical archive facilities, computer network with live backup capabilities and daily offsite backups, coffee and refreshments area for clients and consulting rooms on our 450 sqm site. We invite you to join us for a beverage as we give you a tour of our new facilities.

During the latter part of 2009, the office partnered with a client and donated over R50 000 towards the Reach for a Dream foundation in helping to fulfil the dreams of children with life threatening illnesses throughout most of the Durban hospitals including McCords, Albert Luthuli and Addington.

During January of 2009, the Durban office moved from Umhlanga Rocks to Florida Road in Morningside. The move was undertaken to be closer to our key clients and also to increase the size of our offices from 40 sqm to 100 sqm as our client base grows. We invite you to stop by at our offices near the landmark ‘Spiga’ restaurant.